We proudly announce that our very own Amanda Brown, Catering Sales Manager at CRAVE Catering, was recently voted Board Member of the Year at the annual National Concierge Association’s (NCA) national conference, held in San Antonio, Texas.

But the accolades don’t stop there – Amanda was also voted onto the Executive Board of Directors for the 2015-2017 term and will be serving on the 2015 MN Chapter Board of Directors as well! According to Amanda, she is hoping for another nomination for the local chapter in the upcoming 2016 term and is looking forward to growing the association both locally and nationally.

During the conference, Amanda additionally served on a discussion panel that addressed the current opportunities held currently in the NCA, and how to continue growth within the organization on a personal and professional level. “We discussed how to better serve our communities, opportunities for philanthropy, and better serving the customer service industry as a whole”, said Amanda.

Congratulations, Amanda. We are proud of your achievements and excited for your future accomplishments with the NCA and CRAVE Catering! 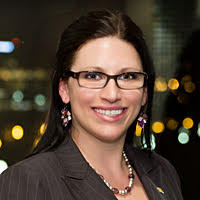 Amanda Brown joined Pinstripes Events two and a half years ago to establish and manage the offsite catering program.  The program was an instant success, growing from a starting annual budget of $300,000 to $1.4 million in the program’s second year.  Amanda first re-established the relationship with the NCA two years ago, and was a very active and energetic member from the beginning, immediately volunteering Pinstripes’ event space to host the 2014 Affiliate Showcase.  In January of 2015, Amanda was voted on to the Board of Directors as the Affiliate Liaison.

Since then, she has played an active role in helping other affiliates make the most of their membership with the NCA.  She planned and executed this year’s Affiliate Showcase at the Chanhassen Dinner Theater, designing the event around the theater and exhibiting its best attributes to showcase its additional theaters and event spaces.

Recently, Amanda has decided to move her talents to CRAVE Catering and Events, where she plans continued success both locally and nationally.  Amanda considers the NCA her most coveted association to date and will continue to play an active role in the NCA’s overall success.